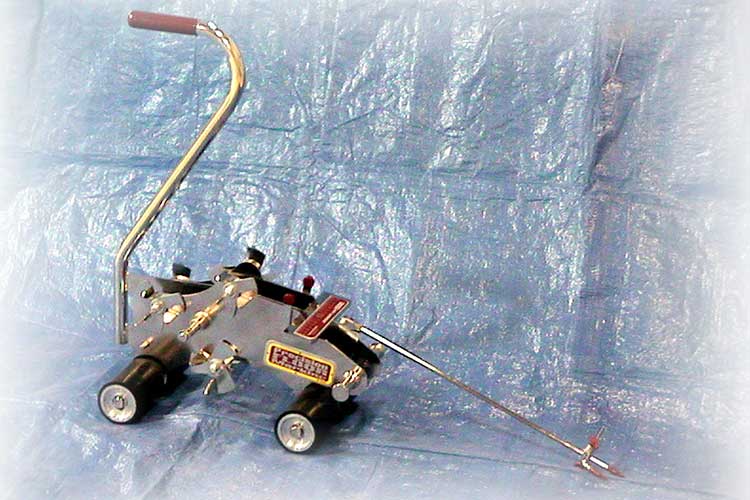 Regardless of what those late night infomercials want us to believe, there just aren’t many groundbreaking products on the market today. I mean, let’s face it . . . those fat burning pills don’t really burn fat, the veggie juicer just spits out shiny green sludge, and that ultimate pancake machine, well it just didn’t seem so ultimate after a while. But just because the combination of creative marketing and midnight logic fools us all once in a while, that doesn’t mean that there’s really nothing new under the sun.

A woman-owned small business based in Grandview, Missouri, is out to prove exactly that, manufacturing and marketing a pair of revolutionary inventions, the Straight Line 1000TM and the Precision Line 360 TM, that are rapidly changing the business of floor marking across the country.

Jennifer Richards, President of Precision Floor Marking Inc., never expected to be running a business with nationwide clients and demands to match, but the lure of a truly good idea was too strong to resist. In 2003, her husband Steve and father-in-law Mike, both amateur inventors, took up a challenge from the owner of Dayco Painting, Jim Gochenour. Jim’s painting business was very successful, but he was fed up with watching his team work for hours on their hands and knees as they marked out aisles for forklift and pedestrian traffic in warehouses and other facilities. The process was slow, expensive, and worst of all, brutal on the knees. When Steve and Mike saw how the job was currently being done, they knew there had to be a better way.

The challenge centered around the miles of OSHA-mandated floor marking required in large warehouse and industrial facilities to control forklift traffic, identify pedestrian walkways, and control inventory. While vinyl tape could be used for floor marking, it was quickly torn up by the fork lifts, making it a temporary solution at best. Painting provided a better and more durable answer, but creating precise lines was labor intensive, slow and very costly. Typically, two employees would use a chalk line to snap parallel lines a few inches apart, running down the length of the proposed aisle. Then both would work their way down the aisle on their knees, laying strips of masking tape along the length of the chalk lines to create a “frame” for painting. The open area between the two strips of tape was then painted with a roller and allowed to dry, so that when the tape was pulled up, a painted line remained. But what also remained was sore knees, bad backs, and a lot of man-hours expended.

Initially, Jennifer wasn’t all that interested in finding a better way to mark floors. With a baby girl, three horses, and a part-time job, she had plenty on her mind already. But there was no avoiding the project, as her husband and father-in-law debated materials, specifications, and design adjustments endlessly in her living room, week after week. By the time they found the solution, Jennifer knew more about floor marking than she had ever hoped to learn, because after nearly a year of prototypes and testing, Steve and Mike had hit on something entirely new: the Straight Line 1000TM.

The benefits of the new design were immediately apparent. It was faster, cheaper, and a lot more comfortable for the worker, allowing them to walk upright while applying the same parallel lines of tape, nearly three times faster than was previously possible on their hands and knees. The width of the line was adjustable, and the precision was much greater. Also, an integrated chalk line anchor eliminated the need for an extra pair of hands, turning a two-person job into the work of one. In short, the floor marking industry was in for a nice surprise.

The product was an immediate hit with Jim’s painting contractors, allowing him to easily outperform his competitors on any floor marking job. Seeing the great potential of the design, Jennifer convinced Steve and Mike to let her form a small business geared toward manufacturing and marketing the product. With that, Precision Floor Marking Inc. (PFM) was born. Jennifer’s extensive background in marketing, advertising and management was a natural fit for the demands of leading a startup operation, and she was soon joined in both the investment and in the day-to-day operations of the company by Chris Gochenour (Vice President) and Evelyn Richards (Treasurer), the spouses of the painting contractor and co-inventor, respectively. The business is now entirely in their ownership and control, with Jim Gochenour, and Steve and Michael Richards remaining involved as informal advisors, generating ideas for modifications and new products.

And that creative role soon proved critical, because wherever the PFM marketing team went, a new application for their product seemed to arise. The first evolution of the product was prompted by comments from several California trade show visitors who saw the value of the machine, but needed something that could do circles as well. Primary among these clients was the Los Angeles Public School District, which was very interested in using the product to mark gymnasium floors, basketball courts, and other athletic facilities. The Straight Line 1000 TM fit the bill for most of the job, but still left the challenge of forming perfect arcs and circles for 3-point lines, etc. Because one of the inventors was present at the trade show, he was able to start considering modifications immediately. And by the time their plane touched down back in Kansas City, Steve had worked it out. Within only a couple of weeks, he had designed and built a rugged adaptor that modified the base Straight Line in a manner allowing it to create perfect circles at nearly any diameter. This concept quickly became the Precision Line 360 TM, and the L.A. School District began making their purchases.

Since then, the PFM team in Grandview has found new applications for their products across a broad range of facilities, including industrial plants, hospitals, convention centers, swimming pools, theaters, and more. Their trade show demonstrations consistently draw an interested crowd, and distribution arrangements for their products, manufactured here in Kansas City, are currently being made nation-wide.

So is it something new under the sun? Very much so. This hometown company has proven that, even without infomercial drama and hype, great ideas can sell. In fact, they’re living proof that the best late-night ideas are more likely to come from friends and family on your living room couch, than from the excitable folks of cable TV.

The Straight Line 1000TM and Precision Line 360TM are produced and marketed by Precision Floor Markings, Inc., a Grandview, Missouri based company. Additional details as well as video clips of the product in action are available at www.straightline1000.com. 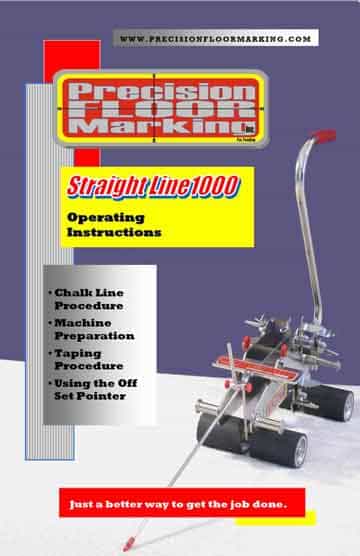 The Straight Line 1000: A Perfect Fit for Every…

Get the Best Value Out of Floor Marking with…